Part 3.  Much More on Roman Papcastle

After the floods of 2009, many of the fields downstream were devasted.  The first of these was Broomlands, behind the Lakes Centre on Low Road. 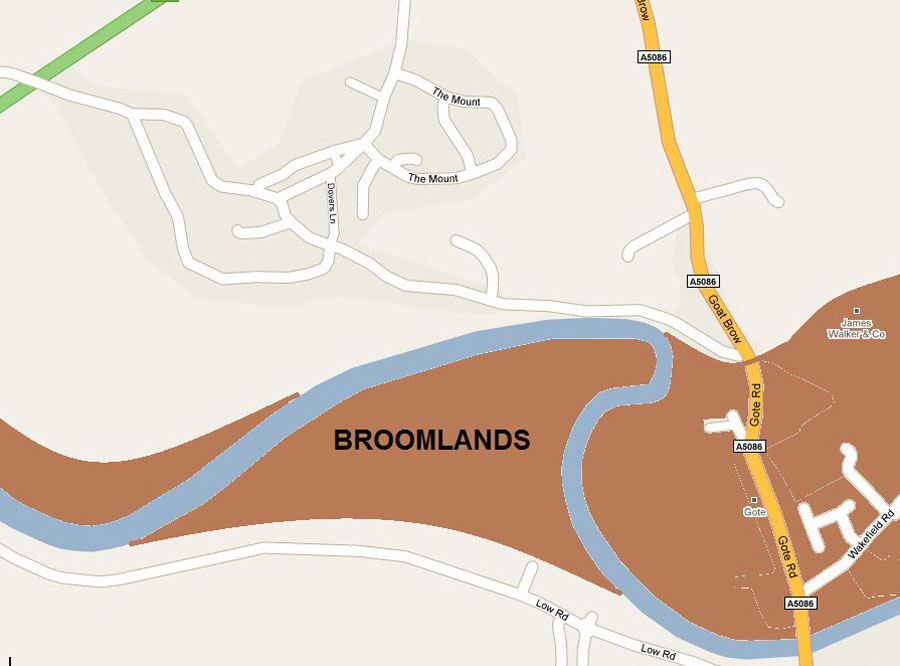 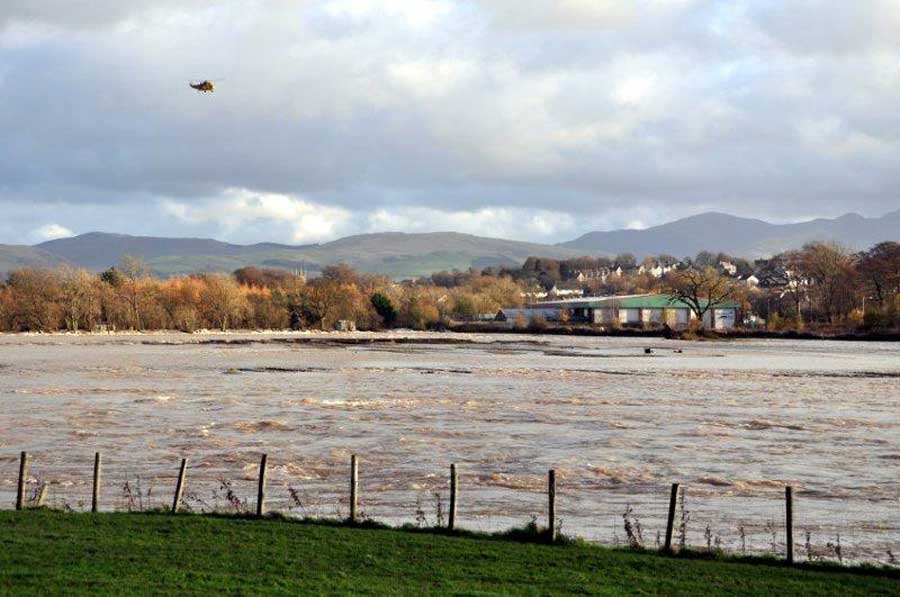 By spring of 2010, there were reports of pottery and coin finds. Papcastle (across the River) is a Roman site (Derventio) which has experienced a number of excavations (including Time Team in 1998). Although all remains above ground have vanished, the evidence grows that it was a major town of comparable importance to Corbridge, the main town supporting Hadrian’s Wall activity. So further exploration was clearly desirable.

Grampus Heritage, who are partners in Bassenthwaite Reflections were able to extend their remit to include this patch and in May/June 2010, a geophysics survey was done over much of the field and also over the river below Sibby Brows in Papcastle. 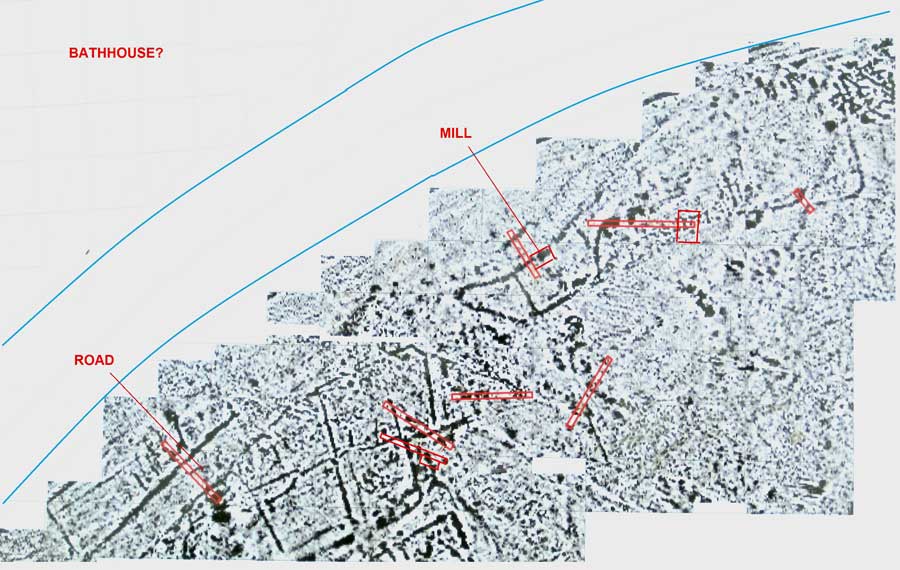 The results suggested a surprising array of features. Consequently North Pennines Archaeology were contracted to conduct an evaluation exploration. They ran a 4-week community ‘dig’ with many volunteers turning out.

Machine-dug trenches on Sunday 8th August prepared the way for work to commence the following day (in persistent rain and hence much mud). A lot of the hard graft by hand, in these evaluation trenches was done by the band of volunteers, working when their other commitments allowed them.

The terrain proved very difficult with much sand and gravel deposit and the archaeology features appearing to be much disturbed. This may be from repeated floods over the centuries, by a change of river course or by the river having more than one channel over time.

By the third week, clearer features were emerging. In particular, the wooden planks of a probable mill race. 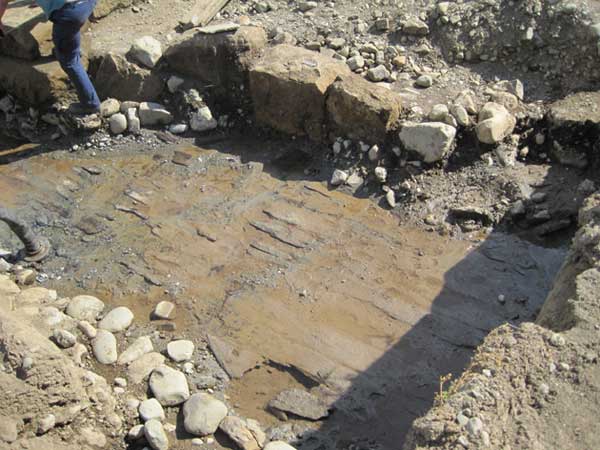 and then the massive blocks of the first courses of the mill itself. This is only the second found in the north of England. 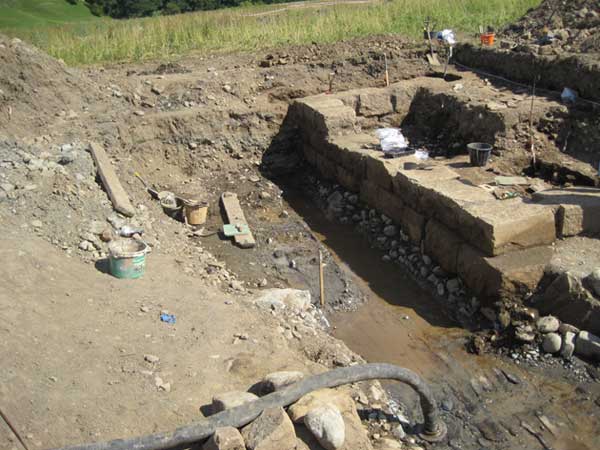 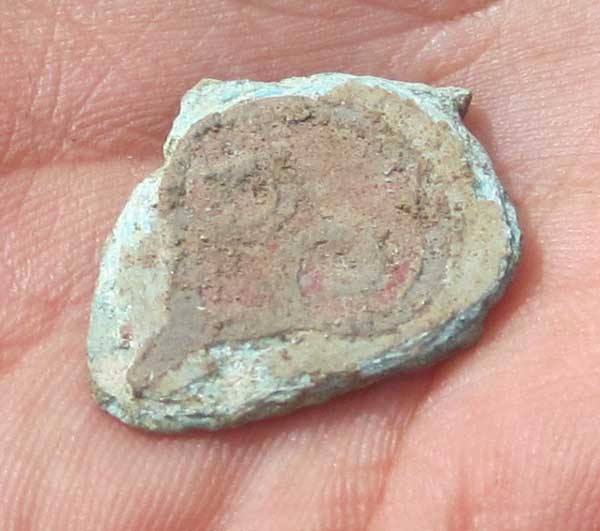 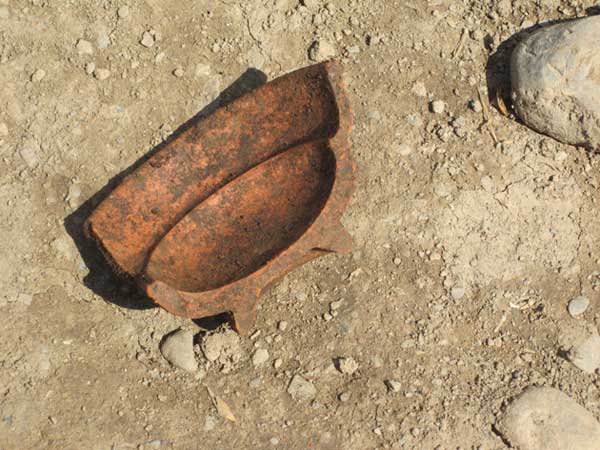 some coins (not a hoard), a partial millstone, a part inscription and the remains of walls as well. The Roman Road was confirmed. Plenty of signs of occupation and industrial activity were found.

The ‘dig’ continued until September 3rd. 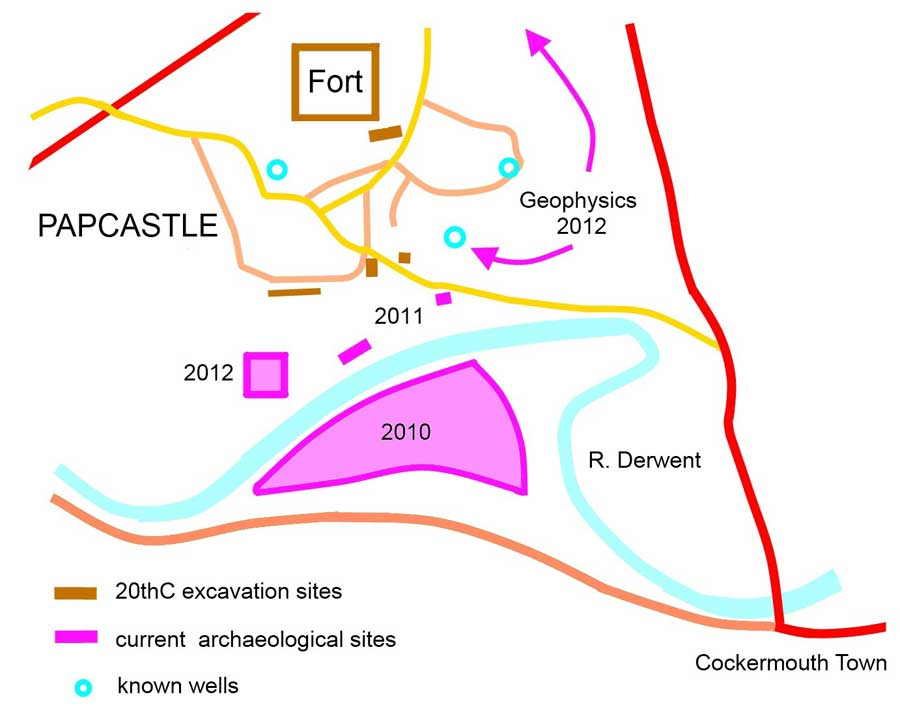 The major dig started 28th August 2012 and ran through until October with a large area (50m by 50m) stripped back. Work started with 18 volunteers and immediately found a substantial house with a small bath-house. The curved wall of the laconicum (warm dry room) was a striking feature. 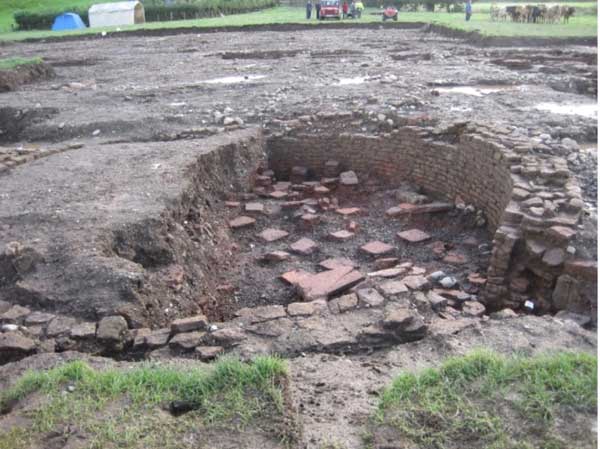 A skeleton was found in one of the hypocaust ducts. A triangular hole in the skull suggested foul play but the local police decided the trail was too cold after nearly 2000 years. 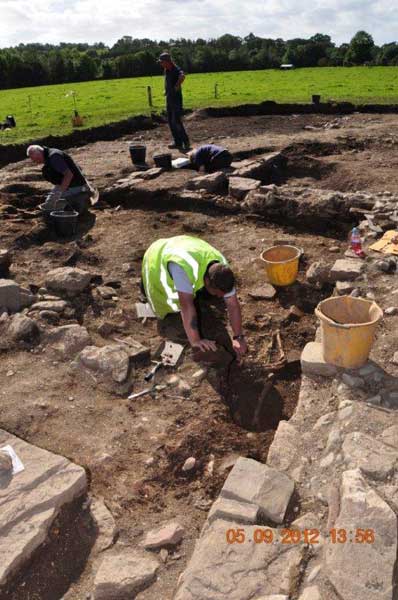 Another exciting find was a long metal object (5ft 7 in or 170cm) identified as a candelabrum. Sent to Leeds Royal Armouries for conservation, it is said to be the best example of its kind in the country.[Photo is of a similar one found at Pompeii.]

Later after finding a large flagged area, which showed nothing on the geophysics survey, a set of three arches, part of the hypocaust were uncovered – part of a second bath house. 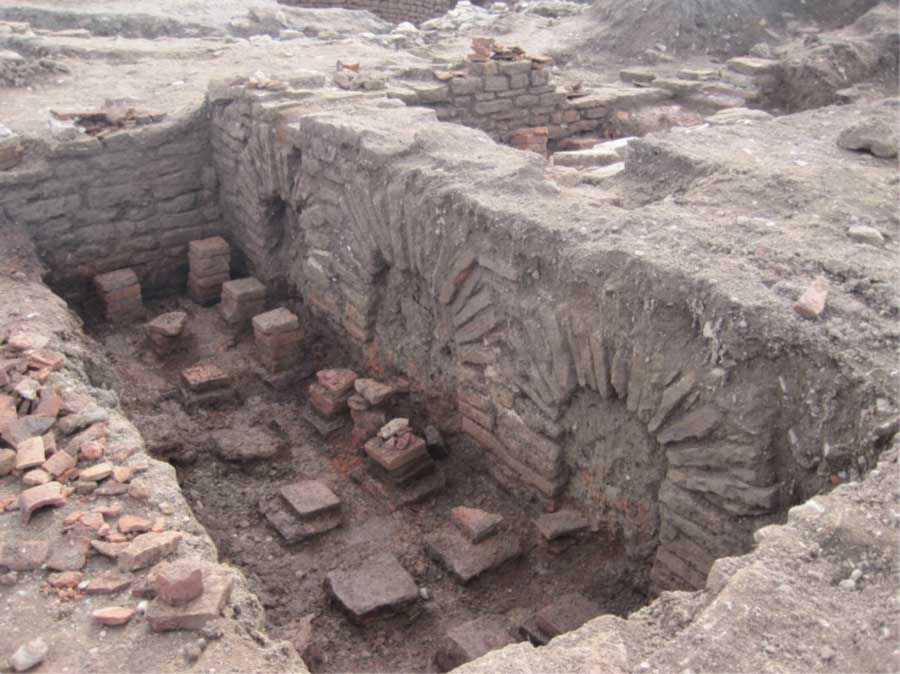 The archaeologists have been puzzled by the lack of an obvious water supply (unless it was a surface one , now gone) and that no latrines have been found.
The excavation was dogged by poor weather, at times so wet that the diggers probably felt like they were at the Somme ( apart from the lack of shells). The dig concluded on 13th October and the site has now been backfilled.
Finds are still being cleaned up and recorded, ready for a standing exhibition for the three years of the project, in Cockermouth Town Hall from January 2013.
Further geophysical surveys were carried out at the end of 2012 to the east of the village to try to establish the extent of the vicus and the route of the road to Carlisle, before deciding next year’s excavation target.

The activity generated much interest from the village and the town with some 30 – 40 volunteers engaged at one time or another and several hundred visitors. 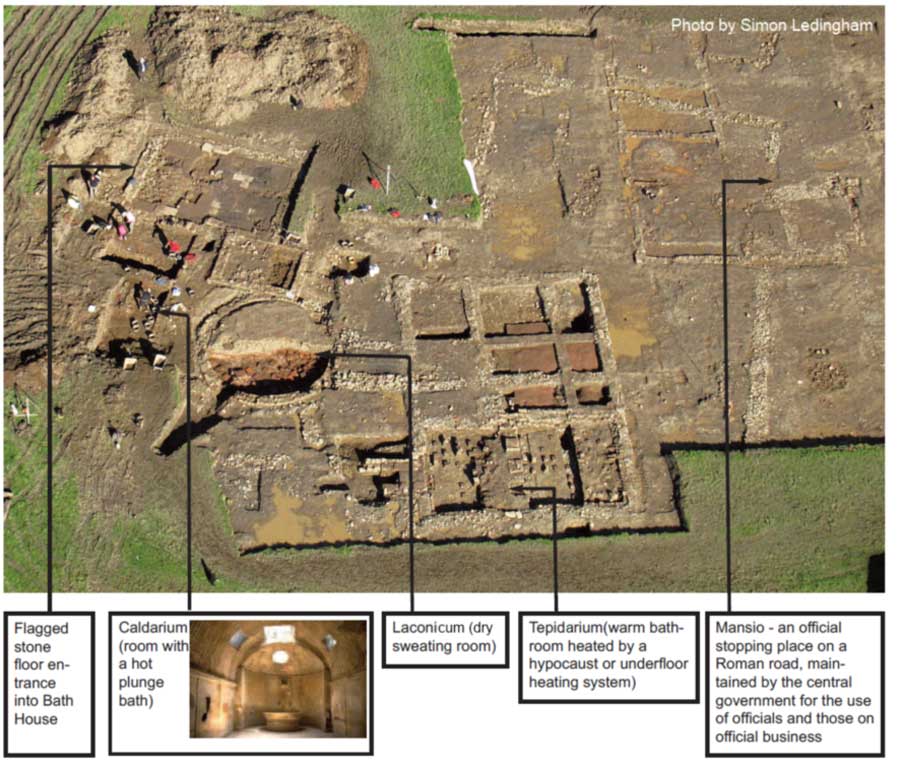 The overall picture at present is that the site of this year’s work was a ‘mansio’ – seemingly Derventio Travelodge for visiting officials, though from the extent and quality of the hypocausts and bathhouses, perhaps ‘Derventio Hilton’ is more appropriate.