Shops come and go, as they do with increasing frequency in Cockermouth town. The first record we have is of Dorothy Blackburn who is recorded in the 1841 census as a grocer (age 70). This was almost certainly in one of the two cottages which were eventually removed in the 1890’s to make way for building the Reading Room (now Village Hall). From the various census listed, there are also
1861 Henry Bragg – butcher
1871 (and 1881) Jane Dodgson of Elm Cottage, age 59 and wife of a retired grocer, recorded as a Grocer and Tea Dealer
1881 Jane Wood, a widow of 66, listed as a bread baker
1891 John Pool, aged 40, butcher (and farmer) and still so in 1901 (at 4 Garden View?)
1934 Miss Dover (Emily and/or Florence, according to Mollie Hayton) is listed as a grocer in Kelly’s Directory; (Emily was born 1883); the shop in later years was essentially confectionery, but also a mixture of haberdashery. It was still there in the late 1960s.
1968 Dorothy Jackson opened a small provisions shop at High Mount; this was a valuable asset for the people in Castle Gardens, a sheltered housing group set immediately opposite, and also for the newly developing estate on The Mount. In 1979 she also took on the Post Office business until she retired in 2003.

There is a limited bus service on the Cockermouth-Maryport route, providing 4 buses a day each way at approximately two-hourly intervals. One can also get the 600 Route to Carlisle at the Belle Vue road end this runs at one-hourly intervals through much of the day (nine per day in 2008). One cannot pretend that these are well supported by the village, so long as a resident has a car. It must be said that a fair number do in fact walk to and from town and those that cannot, make good use of the taxis available from the town.

Low Gote Mills, previously corn mills, were purchased in 1808 by Jonathan (II) Harris and William Harris (cousins), to expand their flax weaving business started about 1800 in Eaglesfield. (Before the advent of cotton growing on a large scale in America, flax fibre was the most important raw material for textiles.) By 1834, the success of these mills led to Jonathan lending money to his sons, Joseph and Jonathan (III) to build Derwent Mill, (not in the parish.) 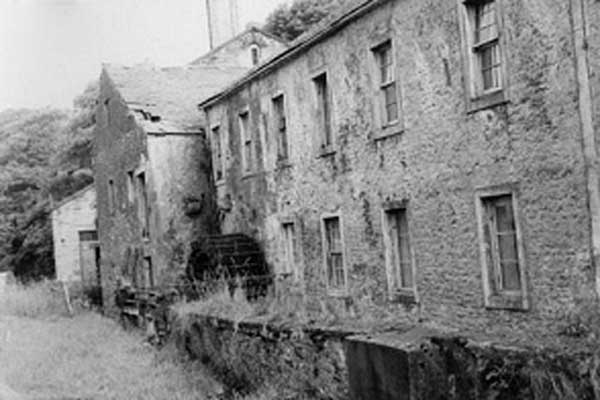 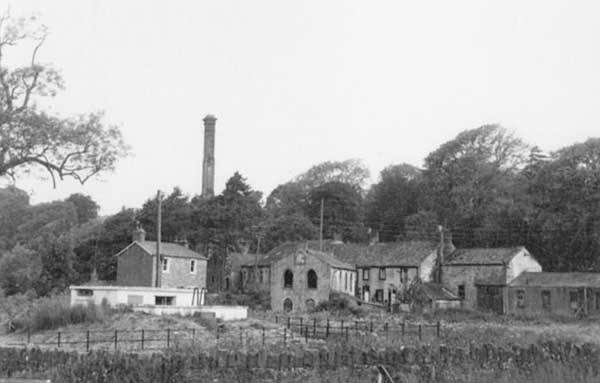 The building in the centre of this full photograph was often identified as a hospice, but was in fact a flax drying building, now converted to a dwelling.
This attained even more success. The later census data shows that many of the workers there lived at the Gote, and some in Papcastle village. Jonathan and William continued at the Gote until 1847 when the businesses combined to form Jonathan Harris and Sons. The Harris family ran the business through successive generations until 1935 when it closed. The family members all chose to live in Papcastle, so that at one stage no fewer than five of the larger houses (mansions) were occupied by members of the family. The mills were derelict in the 1970s and were converted to dwellings in 1978/9. 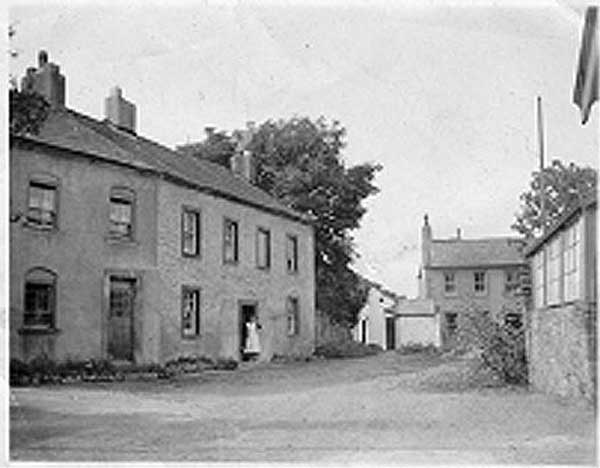 Rotherham and Sons were clock and watch makers in Coventry, working in Spon St. there, adjacent to a GEC Telephone works factory. During World War II, they had a factory operating in High Sands Lane, Cockermouth. Additionally, a small unit was established in Papcastle in Mission Close opposite Orchard Cottage; this polished spindles for attaching telephone dials to the dialling mechanism of the candlestick telephone model.
This process used chromic oxide, fat wax and emery. Lillian Barker (see Chapter 9) who worked there from 1938-1949 remembers this and her mother was the manager of this workshop which employed a total of four machinists. [1]

As essentially a farming community, one would hope to identify the farms around. However it seems that much of the land remained with the Lord of the Manor (Camp Farm not sold until 1981); additionally, there could have been much switching of parcels of land as tenancies changed. There are farms at Bonny Hill and Dovenby Craggs which generally we have left out of our discussion of the village. The number of people claiming to be farmers in the censuses varied and plainly tenancies changed quite frequently. In general there have been about 4 to 5 farms at any one time and this remains the picture today. There are farms at Croft House, Lynwood, Camp Farm (no longer attached to Camp Farm House), Rosemount, Bonny Hill and Dovenby Craggs. 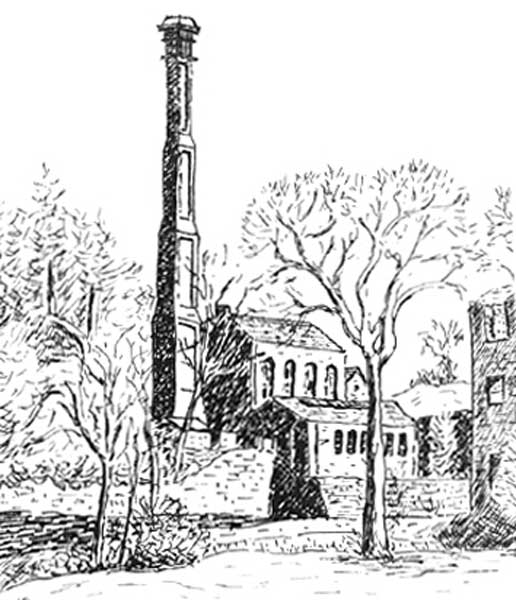 This was built in 1810, [2] to pump water from a well by the Derwent to a sand filter bed nearer Bridekirk, some 220 ft ( 67 m) higher allowing a gravity feed to Maryport. By 1970’s, other arrangements were in place and the buildings were converted to dwellings with the chimney being demolished (1974). The beam engine had been scrapped in 1939. [3]

The original road from Wigton and Carlisle cut across just above Hames Hall still obvious on the older OS maps. The present road met the Maryport road in an awkward T-junction until the 1960s when it is said, the first roundabout in Cumberland was constructed. (Hence the change of name of the pub.)
In 1991, the Papcastle diversion was opened primarily because Derwent Bridge at the Gote was not expected to stand the punishment of ever heavier goods vehicles for another ten years. Certainly as such vehicles became longer and longer, there were more and more mishaps at that corner. The diversion cost £4.2M and is 1.9 km long, together with 0.8 km of new road linking to existing roads. 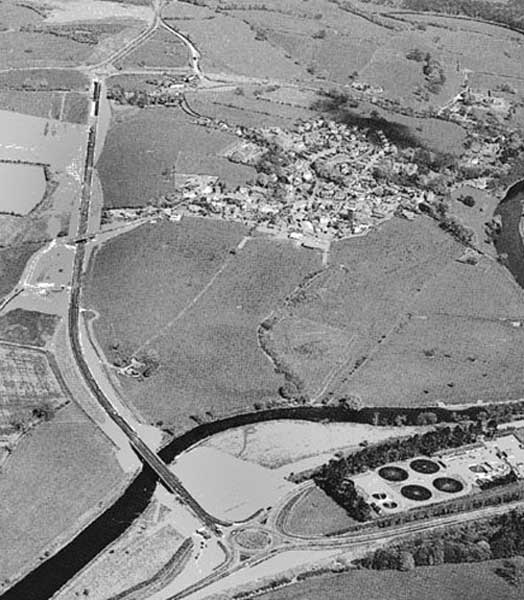 There is a new major river bridge, Papcastle Bridge, and the overbridge carrying the road to Broughton, Crofts Bridge. Since the A66 by-pass of Cockermouth had been completed in 1976, it is often much easier to go round Cockermouth altogether by following the diversion and the by-pass. The effect on the village is that the part of the Maryport road beyond the pub became a dead end.
The junction onto the main road (now A5086) was not well designed being on the inside of a curve. The shrubs planted to enhance the landscape are a perennial problem, obscuring visibility up the hill, whilst turning into Papcastle there at night is a frequent cause for complaint by no means the easiest junction to see. The alternative route into and out of the village, at the bottom of Gote brow, opposite Walker’s factory, is also not well sighted because of the railings, which give a blind spot against cars coming out of town faster than they should.

This was a part of the Maryport & Carlisle Railway, which with a total route length of only 42¾ miles (69 km) ranked as one of the country’s smallest systems. However, it was a profitable little concern; after 1856 dividends never fell below 4 per cent and in 1873 they reached 13 per cent.
The main line was 28 miles (45km)long; there were two branches, one of which came through Papcastle. Traffic consisted largely of coal and iron, of which it carried enormous quantities. 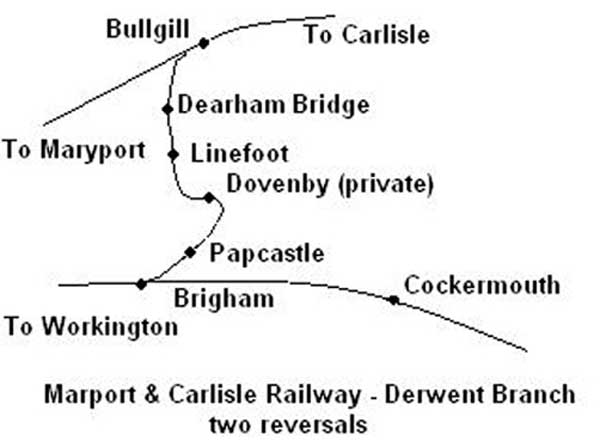 The Papcastle station [4] stood on the Bullgill – Brigham branch; this formed a continuation northwards of the Whitehaven, Cleator & Egremont extension opened in 1866 to Marron East Junction on the Cockermouth & Workington Railway. By running along 2 miles (3 km) of what was by then LNWR track to Brigham, the mineral traffic could then turn up the M&C branch to Bullgill and along the main line to Carlisle. From 1869, with the opening of the Solway Junction Railway, it could turn off again at Brayton beyond Aspatria and so across the Solway viaduct to reach Scotland. 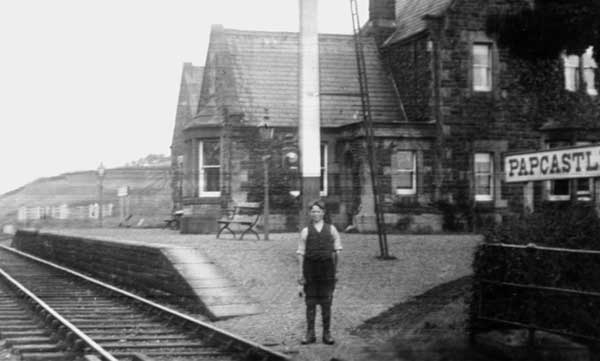 Powers for construction of the Brigham, or Derwent, branch were obtained in 1865. Construction was rapid, and the 6-mile (10 km) line was opened in 1867. Although it passed through fairly hilly country and was steeply-graded, there was little heavy excavation and no major engineering apart from the girder bridge over the Derwent at Brigham. Stations were opened at Dearham Bridge, where there was a colliery, and Papcastle (albeit over a mile from the village).
A passenger service of six trains weekdays and three on Sundays was run between Maryport and Cockermouth, which involved reversing the trains at Bullgill and Brigham. For this purpose the M&C obtained running powers over the LNWR between Brigham and Cockermouth. Papcastle was a signal stop, (i.e. on request). 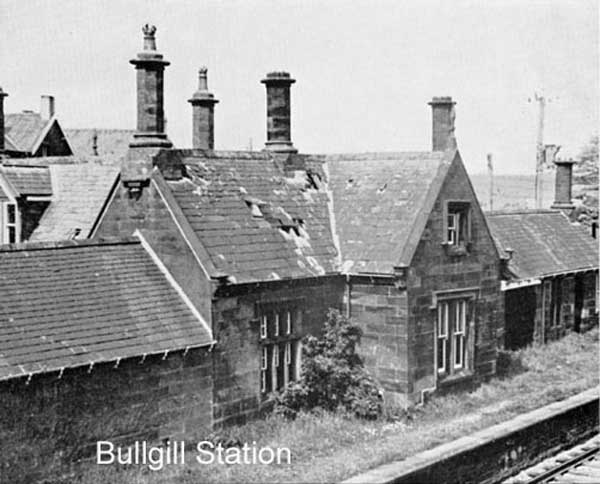 There was also a private station at Dovenby Lodge between Papcastle and Dearham for the use of the occupants of Dovenby Hall, through whose land the line ran. On the main line from Workington to Cockermouth, one resident [5] recalls seeing trains with many cattle trucks bringing substantial numbers of Irish cattle (possibly 1600 each auction day Mondays). This would have been early 20th century. Freight traffic declined during the 1920s as on all the Cumbrian lines, but the passenger service survived until 1935when the line was closed entirely. From a note in the “History of the Maryport & Carlisle Railway” Jackson [6], the description of Papcastle is “A halt. If you wished to leave the train here you informed the guard. If you wished to join the train you informed the wife of a platelayer who resided nearby and she put up the signal.
Given the entries in successive later censuses, it seems doubtful if Papcastle actually merited a stationmaster or mistress.

When the river bridge was demolished later that century, a piece of it dropped and two men, thrown beyond a safety rope were drowned. [7] 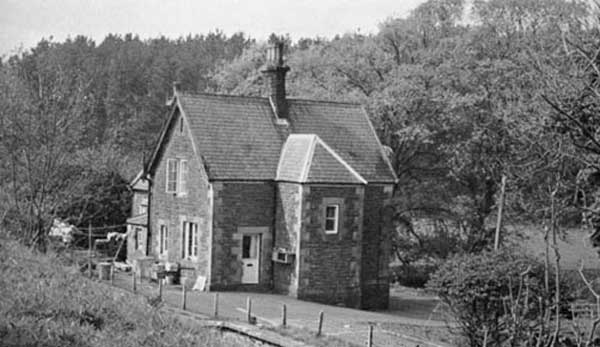 There are notes of some staff at Papcastle recorded in Cumbrian Railways Association database. [8.]

According to Baileys Guide 1900 [9], the first trains of the day were – In the reverse direction