Voting rights before 1832
In early-19th-century Britain very few people had the right to vote. A survey conducted in 1780 revealed that the electorate in England and Wales consisted of just 214,000 people – less than 3% of the total population of approximately 8 million. Large industrial cities like Leeds, Birmingham and Manchester did not have a single MP between them, whereas ‘rotten boroughs’ such as Dunwich in Suffolk (which had a population of 32 in 1831), or Cockermouth (136) were still sending two MPs to Westminster (in Cockermouth’s case by virtue of being a borough in 1295). At this stage, Papcastle would have been a part of the county constituency returning two members.
The right to vote (suffrage) in Parliamentary elections for county constituencies was uniform throughout the country, granting a vote to all those who owned the freehold of land to an annual rent of 40 shillings (Forty-shilling Freeholders). In the Boroughs, the franchise varied and individual boroughs had varying arrangements.

1832: Reform Act – extended voting rights to adult males who rented propertied land of a certain value, so allowing 1 in 7 males in the UK voting rights. Papcastle along with other villages was drawn into the Cockermouth Constituency to try to preserve the right to two MPs.

1841: the list of electors for the Town ship of Papcastle was 29, but only 7 actually lived in the village. [2] The National Archives record a letter about Election violence in Carlisle, 1841. This letter to Sir Charles Napier recounts the serious unrest in Carlisle during the canvassing of candidates for a forthcoming election. 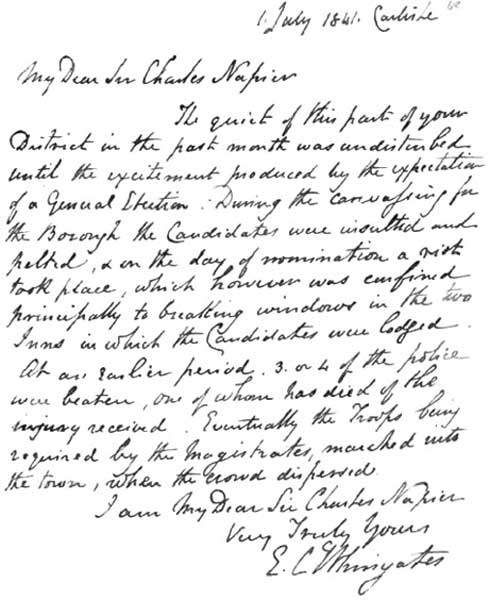 Napier was the military commander for the north of England, an area rife with Chartist activity. Although Napier sympathised with the Chartist cause he was firm in upholding the law against protests that often became violent. [3]

1867: Reform Act – enfranchised all male householders, so increasing male suffrage in the United Kingdom; boroughs up to 10,000 population dropped to one MP Cockermouth included.

1872: Before the Ballot Act of this year, which introduced secret ballots, elections were a sordid affair with bribery, intimidation and the like commonplace. Bradbury [4] gives some examples of the shenanigans which went on.

1884: Representation of the People Act – amended the Reform Act of 1867 so that it would apply equally to the countryside; this brought the voting population to 5,500,000, although 40% of males were still disenfranchised, whilst women could not vote. Cockermouth was now merged with Workington.

1913: the villages electoral list showed 17 owners, only 9 living in the village; 101 occupiers qualified of whom 42 were in the village (others at the Goat and outlying premises) and 29 women qualified to vote for local authorities but not for parliamentary elections (16 in the village).[5]

1918: Representation of the People Act – the consequences of World War I convinced the government to expand the right to vote, not only for the many men who fought in the war who were disenfranchised, but also for the women who helped in the factories and elsewhere as part of the war effort. Property restrictions for voting were lifted for men, who could vote at 21; however women’s votes were given with these property restrictions, and were limited to those over 30 years old. This raised the electorate from 7.7 million to 21.4 million with women making up 40% of the electorate. Seven percent of the electorate had more than one vote. The first election with this system was the United Kingdom general election, 1918

1928: Representation of the People Act – this made women’s voting rights equal with men, with voting possible at 21 with no property restrictions

1975: Finally by comparison, the electoral roll for the Parish just after the major changes which saw both Cockermouth Urban District and Cockermouth Rural District absorbed into Allerdale District Council in 1974 totalled 354. [6]