The only evidence of any human influence at Papcastle before the Romans arrived are some standing stones mentioned by Denwood [1] “a huge monolith near the Derwent below Papcastle, demolished in 1946” and Askew [2] refers to one, which may be the same one, and to three in a field between Papcastle and Broughton.  There are of course many other traces of early Britons in the area around us, e.g. Castlerigg stone circle, near Keswick.

The Romans, arriving in Britain in AD 43, probably did not venture as far north as Cumbria before about AD 80. Of the many forts they built, the first in Papcastle, no doubt with only wooden defences, is believed to date from this time.   This was succeeded by a more substantial one by the second century and remained in use until almost the end of the Roman occupation period.  After many an earlier academic debate, it is now agreed that the Roman name was Derventio, which was a local name for the river. 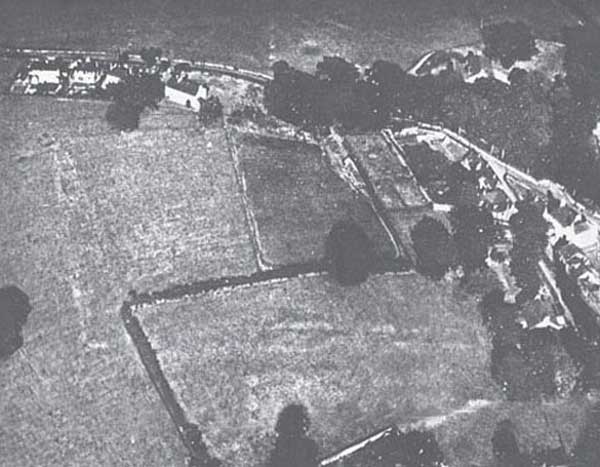 As is usual, a civilian settlement or vicus developed, on the south facing slope towards the river.  The fort stood at the junction of major Roman routes from Carlisle, Maryport, Moresby-Ravenglass and Keswick.  There must have been a river crossing, but more than likely the Derwent has changed its course during nearly two thousand years, so no trace of it has been found.

Unfortunately for historians, much of the stonework of the fort above ground  and probably the township, was taken to build Cockermouth Castle in the 12th century.  No doubt farmers were not slow to acquire useful building stone for wall and farm buildings.

Various antiquarians have recorded visible remains;  Camden (1586 to 1594) called Papcastle “the carcase of an ancient fort” and in 1610, records that the font, now in Bridekirk church, had been discovered here. [3]  Gale [4] in 1709, identified the fort as Derventio,  correcting earlier misidentifications.   Stukeley [5], in 1725 gave a very detailed account (quoted verbatim in [8]).  The latest description of any value was that of Askew in c. 1864 who wrote

“The village of Papcastle occupies the site where once stood the Roman City of Derventio, for a period of at least two hundred years. Coins, altars, buried grain, and earthen vessels are still frequently found in the gardens and fields. The first turn to the left on leaving Salathiel’s birthplace, leads to Sibey Brows, a rich pasture field. Part of this field is fine table-land, the other a steep brow rising from the valley of the Derwent. About 21 feet from the base of the accivity is an inclined way seven yards broad, which seems to have been a much used thoroughfare. In the field adjoining Sibey Brows, at the foot of a straggling wooded bank, a piece of splendid road sweeps down to the river. Between this road and the river are some faint traces of a large building, which may have been the public baths; and in the second field on the Broughton road, on the left, there are still some remains of an amphitheatre. About the middle of the tableland in Sibey Brows, there are still some traces of the western boundary of the military camp of the Romans. On the high ground above the village there was a strong castrum or Roman castle, up to which there are still some faint traces of streets.

The Romans did nothing on a small scale -their walls and edifices nearly always approached the stupendous, so that we have every reason to conclude that Derventio was no mean city. In excavating for the foundations of Derwent Lodge, the workmen opened out a fine Roman well, and turned up a quantity of burned grain, together with some coins.  Sibey Brows is one of the earliest and richest pastures in the neighbourhood. Mr. William Dickinson thus accounts for its fertility in his Agricultural Essay in West Cumberland :-“ The soil of Sibey Brows is reputed to be blackened with the carbon of burned grain belonging to the ancient Romans. Tradition says the extensive and well-stocked granaries of these warriors which stood there, were accidentally destroyed by fire; or this district may lie on the remains of an ancient forest destroyed by the same agency.” About seven years ago, F. L. B. Dykes, Esq., of Dovenby Hall, assisted by Mr. William Richardson, his land steward, and Mr. John Hodgson, Surveyor, of Bassenthwaite, made a thorough survey of the old Roman road from Papcastle to Maryport; the whole distance being carefully laid down and mapped by Mr. Hodgson, affording the Ordnance Survey much valuable information when they visited the district.

At a distance of about two hundred yards from the [Dovenby] Hall, in the pasture land, is a well-defined track, in a direct line with the old highway between Cockermouth and Maryport. The materials of which the road was made were found to be simply such stones as lay about in the neighbourhood through which it passed,—sandstone, limestone, or cobbles. The interstices between the large stones being carefully filled up with smaller ones, made an even and smooth surface, in some parts, of the route, the road winds round the base or a hill, but invariably comes back to a straight line. The Hall grounds, near the mansion, contain the remains of two or three remarkable tumuli. One in the front parks, in the shape of an ellipse, is in dimensions -the greater diameter, 112 yards; the less, 70 yards. In the “Guards,” a field close to the ‘village, through which the footpath passes to Little Broughton, another in shape nearly circular, forms part of an orchard. Between these, again, is a small circular one. They are all on the margin of a stream. The custom of the Romans was to bury their dead by the side of their highways; these tumuli may be the remains of some cemetery or place of tombs.

A well-defined piece of Roman road, which connected a station at Moresby with Papcastle, may still be seen in the townships of Brigham and Eaglesfield. And in a narrow field across the brook in the township of Eaglesfield, the traces are very distinct up to the verge of a hazel wood, where there is also a fine Roman well. ”

A Roman road, continuing southward from Papcastle, is described in 1815 as taking a straight course from the south of Cockermouth by Street Gate, Lamplugh Cross, Frizington, and Cleator to Egremont. Towards Cockermouth it was six yards wide, and paved with cobbles and stone from the adjacent ground. Near Eaglesfield, it was found in 1794 as a paved way, seven yards wide, a little below the surface, and in 1877, though the road had been plundered of its boulders about 20 years before, the foundation had lately been uncovered near Lamplugh. In Frizington Park the road was found seven yards wide about 18 inches below the surface, and it could be traced near Cleator. [6]

But by the 20th Century, one would not know of the Roman origins of Papcastle except for the residual earthworks at the highest point of the village.  Enterprising tourists looking for the Roman Fort marked on O.S. maps are doomed to disappointment.

With a more enlightened view about the importance of archaeology, there has been a number of rescue digs in the village.  The first serious look at the fort was by Collingwood in 1912. [7]  The situation was assessed in detail by Eric Birley in 1961, [8], when it became known that the County Council intended to build the 16 units of sheltered housing at Castle Gardens.  This  led to a rescue dig by Charlesworth in 1962. [9] The main outcome was that the site was largely robbed out as the archaeologists say, and a probable wash down of soil from the high point will have taken with it many artefacts.

In 1984 when the Burroughs Cottage had to be demolished (where Old Orchard now stands) there was a short rescue dig led by Adrian Olivier of Lancaster University. 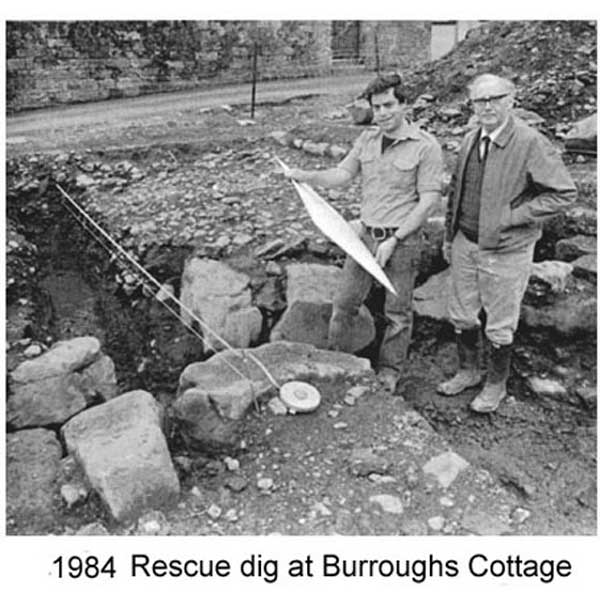 Substantial foundations (Temple of Apollo?) and a great number of artefacts were found. In subsequent feedback to the village, it was suggested that Derventio might well have been an armoury base, supplying all the military in N.W. Cumbria.[10]

In 1998, Channel 4’s ‘Time Team’ spent their customary three days, starting in the very restricted space of the garden of Derwent Lodge Cottage; the owner had found much material in preparing for an extension.

The team also excavated at Sibby Brows (field opposite The Grove) and saw the evidence confirming earlier references. 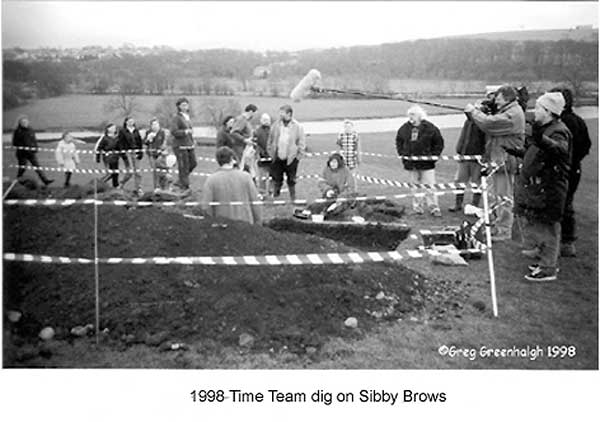 The overall verdict was that Derventio must have been a substantial town, perhaps on a par with Corbridge, recognised as a major settlement for Hadrian’s Wall. [11]

In 2001, there was a further dig to the south of Castle Gardens before a new house was built (Quintana) [12], but nothing of significance was found there. 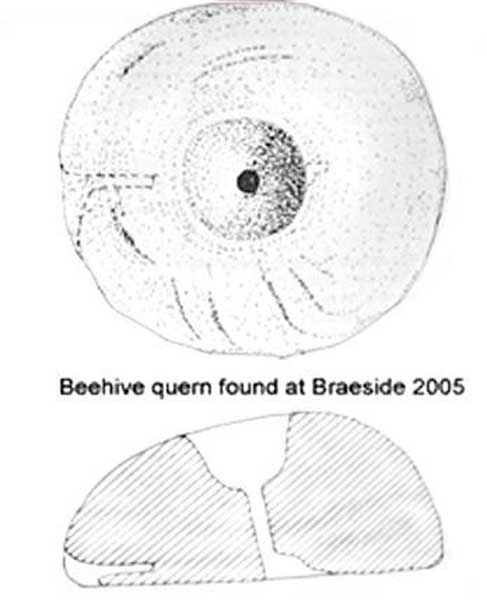 Surprisingly, there does not appear to have been any archaeological work done when The Mount estate was cleared for the development of a 45-house modern estate – building started in 1965.

There are several wells in the village, more than likely all serving the vicus.  There must be a great deal more Roman history of the village, sadly buried under the gardens and increasingly under the present-day houses. Opportunities to dig are therefore going to be very limited.

The Romans were under severe attacks from Picts, Saxons and Scots from about AD 367 and eventually pulled back from Britain by AD 410.  Derventio may well have been rebuilt at this time, and was apparently still in use in the late 4th century, i.e. AD  380-400.

For a very full account of Papcastle in Roman times, as well as the road network, the reader should see Bradbury’s “History of Cockermouth”. [14] 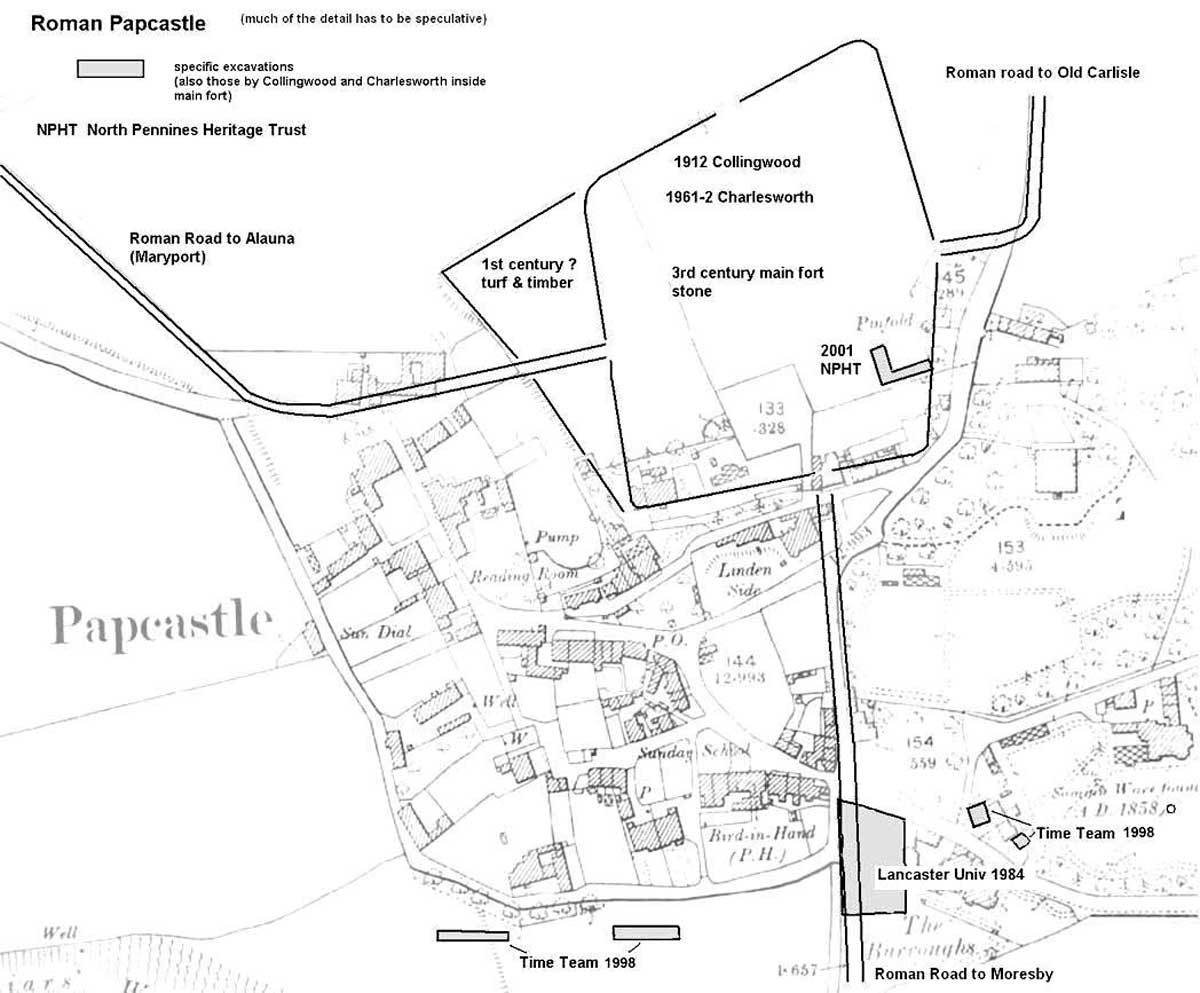 Chapter 2. From the Romans to the 17th Century