Memories from six villagers provide an insight to various characters and life in the village during much of the twentieth century. Between them, these villagers, Lillian Barker, Molly Hayton, John Moses, Pat Redmond, Mary Strong and Eva Walker have some 450 years of village memories to recall. 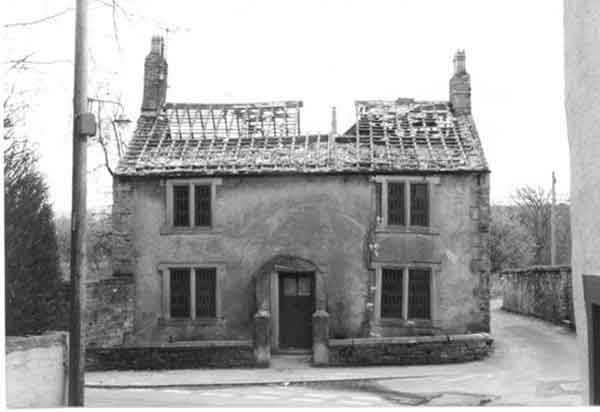 Molly Hayton came to live in “Burroughs Cottage” in 1941. The “Burroughs Cottage” was demolished and the site redeveloped in 1984 where “Old Orchard” now stands. Molly married Ted Hayton in 1949 and they moved into “Perth Cottage” in 1954, where they still live. Molly believes that next door “Ashton Cottage” took its name from an ash pit which was in the vicinity and where the villagers used to deposit their ashes.  She also recalled that next door to “Kerria Cottage” there was a communal wash-house and the drying green was on the edge of the village where “Braeside” now stands.
Molly described the sweet shop at the corner of Dover’s Lane, ran by Emily and Florrie Dover.

Lillian Barker, who has also lived in the village all her life and in “Fern Cottage” since 1969, remembered the sweet shop clearly. She thought it closed sometime in the 1970s. According to Molly, Florrie Dover originally worked in the Harris Mill in Cockermouth but took over the shop in Papcastle when her sister died.
MolIie and Ted recall their wedding reception in the Village Hall in June 1949 on Ted’s return from service with the navy. Some sixty guests enjoyed the catering provided by the Co-op but as the reception itself was a “dry” occasion, it was just as well that the Vicar at St Bridget’s had steadied Ted’s nerves with a nip of whisky! 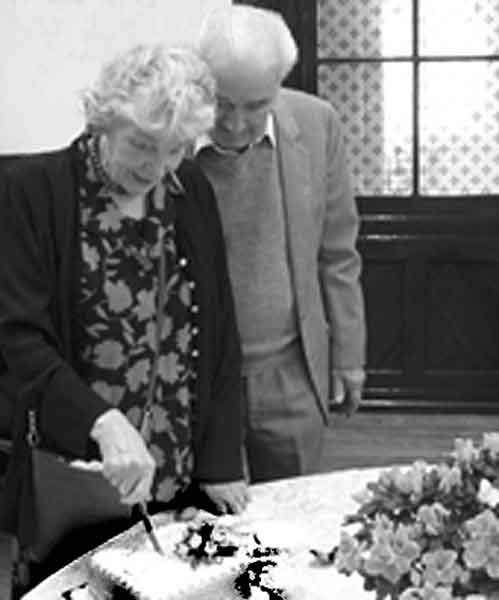 John Moses remembered the “Bird in the Hand” (opposite Molly Hayton’s “Perth Cottage” home) becoming a shop run by Mrs. White after it ceased being a public house. Molly Hayton recalled another public house across the road from the “Bird in the Hand” named the “Mason’s Arms”. According to Molly it occupied one of the rooms of the building now known as “Kerria Cottage”.

Next door to the “Bird in the Hand”, Ralph Collis lived in “Oak Cottage”.  Molly recalled how Ralph had started work as a boot boy in the employ of Miss Waugh of the “Burroughs”.  Eventually Ralph worked his way up to becoming chauffeur and when Miss Waugh died, she apparently left him the row of terraced houses which included “Oak Cottage”. 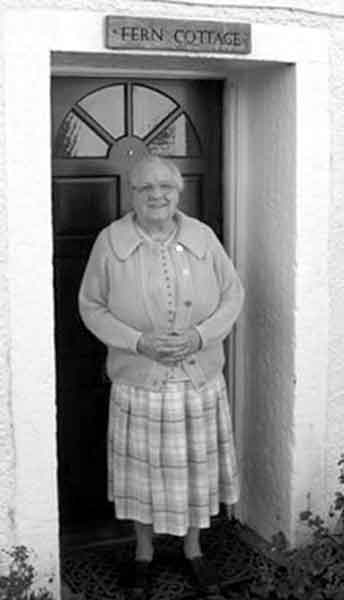 Older residents recall there once being a factory in Papcastle. Lillian Barker worked from 1938 to 1949 for the Rotherhams Engineering Company which was located on the site where “Jasmine Cottage” now stands. The firm employed four machinists and Lillian’s duties included polishing telephone spindles with chromic oxide, fat wax and emery. These spindles were used for attaching the candlestick type telephone to the dialling mechanism.
Mary Strong nee Jackson, has also lived all her life in the village. She was born in “Grove Cottage” in 1928 and her “Auntie and Uncle” – sister and brother, Elizabeth & Robert Fisher from St Bees, bought “Croft Farm” in 1913. As they approached retirement, they built “The Crofts” on the westerly edge of the village and passed on the farm in 1930 to Mary’s father, Robert Jackson. 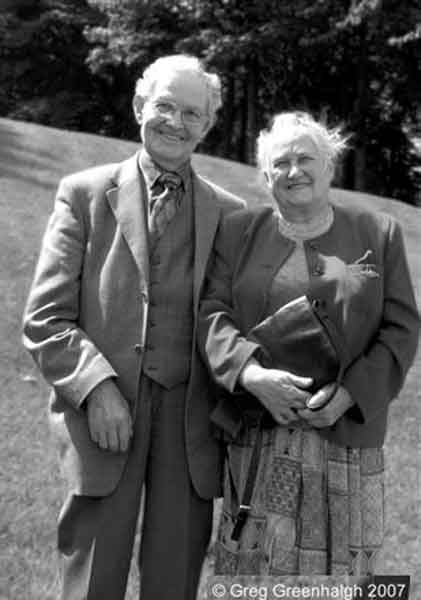 The family started a milk business which Mary and her husband Joe Strong, operated continually thereafter until the Foot & Mouth epidemic in 2001.
Mary’s school years were disrupted by World War II and Mary recalled how her school in Cockermouth had to be shared with evacuees from the Newcastle area. This meant she only attended school for half days whilst the other half day was allocated to the education of the evacuees.
Strict rationing was very much a part of Mary’s life in the post war years. Papcastle villagers would come to the farm door with empty jugs where Mary would carefully measure their rationed pint of milk, cream etc.
The milk was separated every day and the cream kept for a week to make butter which they sold throughout the war years along with margarine and lard. Each had to be strictly weighed before exchanging for ration coupons, which in turn had to be passed on to the Ministry of Food. Every Wednesday, without fail, the butter churn would be dragged into the yard and Mary tasked with its constant turning. In the hot summer months, Mary remembered collecting ice from the hospital to put under a slate on which their dairy produce stood – no refrigerators in Papcastle in the 1940s. Milk bottles were eventually introduced but the twice a day deliveries during this period were all on foot as petrol was still rationed too.

Lillian Barker also remembered that a horse and cart would deliver coal to the villagers and for groceries; the villagers would either walk into town or give an order one week and have it delivered the next. Wilson Mounsey, a Cockermouth baker, provided the village with bread and cakes. Armstrong’s delivered meat from their premises in Allerby and also provided provisions for the residents of Papcastle.
When Mary Jackson married Joe Strong in 1949, she still delivered the morning milk on her wedding day before going to church and the second delivery later on the day after the reception! Mary recalled how her family had “good connections” and, despite the food rationing, they were able to get all the ingredients for the wedding cake which she baked in a coal fired oven. 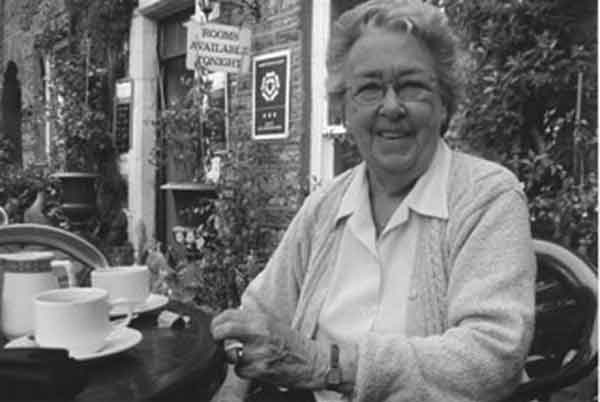 Eva Walker, (nee’ Sharp), is another resident who has lived in the village all her life. She moved to one of the cottages attached to the Belle Vue pub in 1927. Her father, Harry Sharp was a miller, working at a flour mill on Gote Road. Papcastle’s children attended school at Dovenby and Eva remembered sometimes getting a ride to school on a horse and cart, “accompanied by a few sheep”. Lillian Barker remembered the walk to school in all weathers along the Cockermouth to Dovenby main road. She recalled how children would take packed lunches – as no school dinners were provided – and these would be eaten outside when fine and inside if inclement. The school consisted of seven classes which were divided into two rooms. This meant that three classes were in one room and four in the other. These were overseen by a master, matron and a teacher. Eva Walker remembered the school inspector, Mr Martin, who sported a waxed moustache and carried a silver tipped cane. School trips were by charabanc to Allonby where the races were organised. During the winter months Lillian Barker recalled how the children were allowed to skate and slide on the frozen Dovenby Mill Pond. Older children were sent out at lunchtime from school to test its suitability and great fun was had by all. In the early 1930’s Colonel Dykes opened up his home, Dovenby Hall, to allow the local school children to play with the toys and use the nearby fields. Some of the activities included: top and whip; skipping and hop scotch.

Pat Redmond comes from a family with long associations with Papcastle. 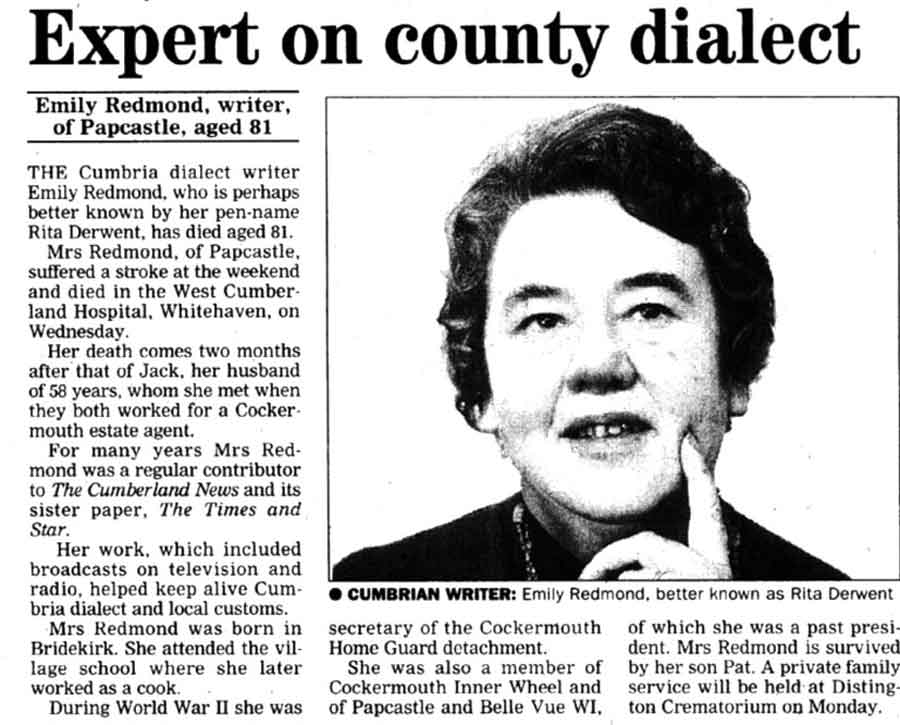 During World War II he moved with his family from Cockermouth to live with his grandmother in Belle Vue. Pat’s father, Jack, was the area manager of the first Bradford and Bingley Building Society office in Cumbria.
His mother, Emily, worked as receptionist to Dr. Govan in South Street. She also wrote for the Cumberland Star – often in Cumbrian dialect – under the nom de plume of Rita Derwent and frequently appeared on Borderelevision.
Pat remembered some of his neighbours in Belle Vue, including Joe Hetherington, a retired schoolmaster, Bobby and Renie Sinclair, and the Sedgwick family, including Basil and Jack.
The family eventually moved to “Woodlea” where their neighbours included Bill Sinclair. Bill was a beck watcher for Castle Fisheries on the lookout for Derwent river poachers and, according to Pat, “Lillian Barker’s cockerel, which used to frequently visit Pat’s bantams”. Molly Hayton also remembered Josie Ellwood from “Holly Lodge” in Dover’s Lane who bred  bantams and fighting cocks which he kept in the wood which was beside “Derventio Cottage” Josie was a wheelwright and had his joinery business in the yard at the rear of his home.
Many Papcastle residents will remember Dorothy Jackson’s post office opposite Castle Gardens. Eva Walker helped to run this shop for a while and also worked for a time in the offices of Miller’s Shoe Factory. John Slater, the founder / owner of Miller’s Footwear, relocated from Great Yarmouth to Cockermouth in 1940 and lived in “Lindenside” in Papcastle, next door to John Moses’ parents, John & Gladys Moses at “Lindenside Cottage”. The Slaters bought “The Burroughs” in 1946 after Miss Waugh died, where they lived until 1969. Their son, Philip Slater,still lived at “Tommy Gill” in Papcastle, until he died in 2009.
Another substantial mansion in Papcastle was demolished in the 1960s to make way for a new housing estate; this was “The Mount”. The grandfather of Eva Walker’s husband, Denis, was the gardener there and lived in a cottage at Belle Vue now “Premier House”. Lillian Barker clearly remembered “The Mount” with its white cottages housing the servants that stand adjacent to the new estate. She also remembered the stables/groom’s accommodation where the post office used to be.
Lillian had very happy memories attending the children’s Christmas parties held in Papcastle’s Mission Room the 1930’s. The children would dress in costume and hold concerts accompanied by accordionist (and blacksmith), Jonty Carr, from Dovenby. The highlight of these parties was the receiving of presents from Miss Waugh. Lillian was also press-ganged into being the secretary of The Belle Vue and Papcastle Senior Citizens Association (originally entitled “Old Folks Association”) when she was a mere 35 years old. Mary Strong was treasurer (and she has some of the original accounts to prove it). This group, in addition to an annual Christmas party, organised outings to Morecambe, Dumfries Market, Dalemain, Moffat and other far-flung hotspots.

Some recollections of village life

Gooseberry Fair
This article is from a local newspaper we believe around 1930:
“Papcastle Gooseberry Fair was one of the great annual institutions of the social life of Cockermouth. The first three Sundays in August saw hundreds of people going in the afternoon and evening to Papcastle, baskets in hand, for gooseberries. Papcastle was to gooseberries what the Cheddar Gorge is for strawberries and the growers of the gooseberries set stalls out in front of their homes laden with great baskets of ripe gooseberries which were bought for eating right away or for making jam.”

How life has changed! 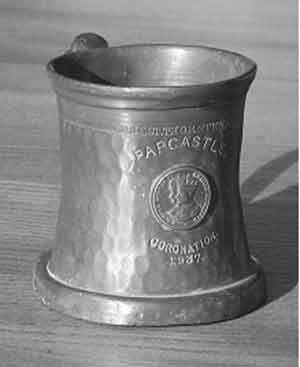 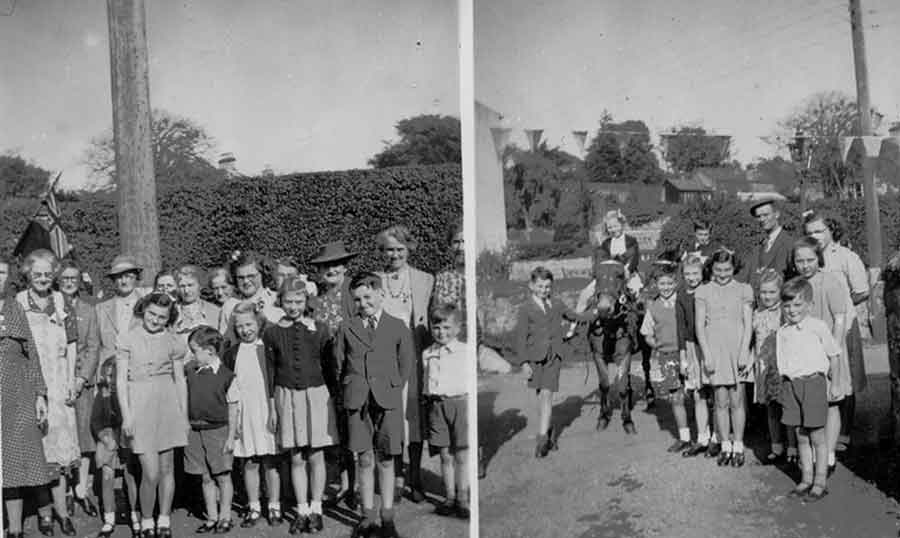 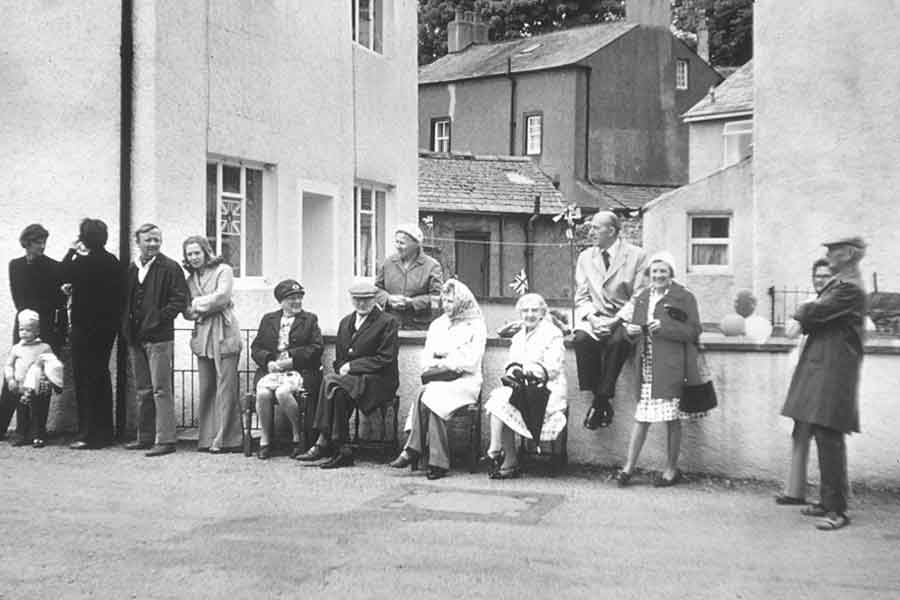 Awaiting the Jubilee procession in 1977 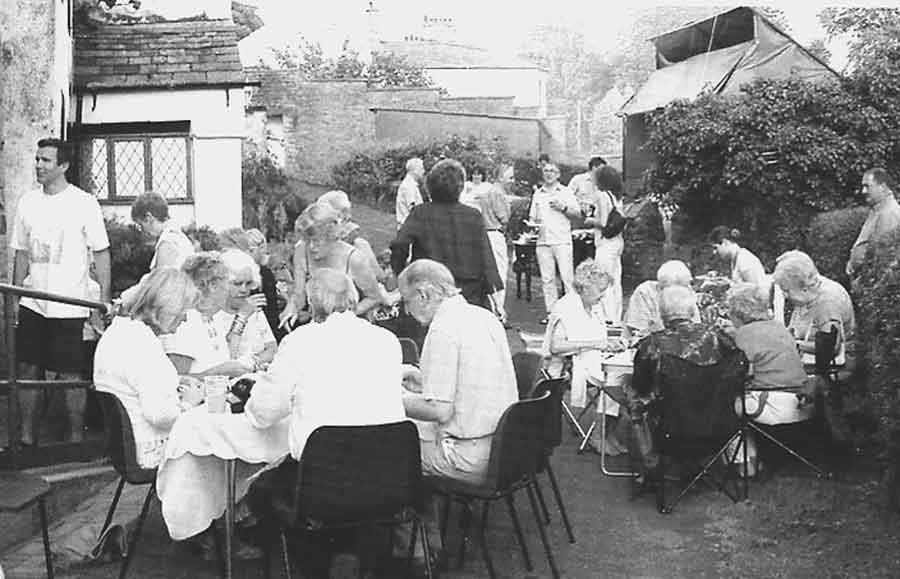 Coach Outing Summer 2006 to Haverthwaite Railway and Steamer on Windermere